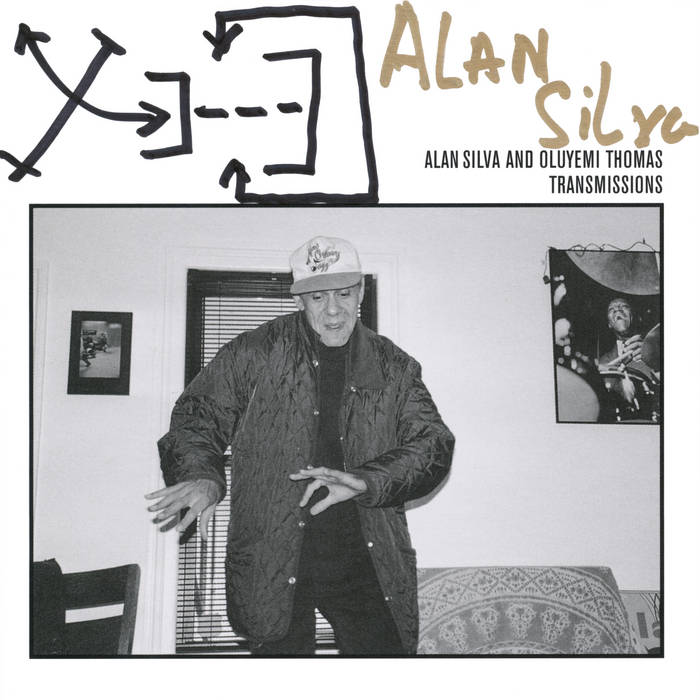 A music master is one who has developed a profound musical language. A language that transcends & recreates the history of sound each second, while at the same time existing in the moment. Knowing that life is too precious to squander on mundane 'jazz.' Feeling & believing that each & every time music is played there is an opportunity to be a conduit for peace, wisdom & understanding on the highest level.
One such master is Alan Silva... welcome to his musical world. A world of sound, a world of color, a world of mountains, stars, planets. A world of spirits that heal. As an innovative bassist his arco & pizzicato work is unprecedented. Check out the Jimmy Lyons' recording Other Afternoons, Albert Ayler's Love Cry, & Cecil Taylor's Conquistador. Listen to the broad strokes he paints with the Silva Glissando, one of his trademark creations. This work stands up to & is equal to the work of Ray Brown, Charles Mingus, or Richard Davis at their best.
Alan was one of the first exponents of a term that is known today as conduction: the spontaneous creating of group composition without the aid of written music. Alan Silva was doing it in the 60s, the 70s, the 80s, the 90s, & he continues to create & compose for large orchestras today. Through his own concepts, & pivotal musical meetings with Bill Dixon, Cecil Taylor, Albert Ayler, Sun Ra & Frank Wright, Alan has helped advance creative music in the 21st Century to another level. & Alan is a brilliant thinker & educator. While living in Paris, he founded &, for over twenty years, ran IACP (Institute for Artistic & Cultural Perception), a very, very progressive music school that taught the Alan Silva Autodidactic System of Music Education. Like so many other creative musicians coming out of Afro-American traditions, he has yet to be recognized in America. Maybe one day! However it goes... Alan Silva does not hold his breath or sit around waiting to be discovered; he continues looking for signs & sounds of life. This brings us to the beautiful afternoon of October 16, 1999: the duet concert with Oluyemi Thomas, the magical mystery man from the west coast. Just the bass of Silva & the bass clarinet & c-melody sax of Thomas in the Unitarian Church in Amherst, Mass. First silence, & then the sound of stringliness, the idea that all string instruments live somewhere inside the bass fiddle, & from time to time they come out speak to us. I have always asked the question what would a bass clarinet or c-melody saxophone sound like if the wind blew through it. When I listen to Oluyemi Thomas, I get my answer. This music is a prayer. A conversation that is just as much inward as it is external. So activate your third ear. Try to hear the voice of the earth house/the trance/the formation & transformation of matter. The long meditation, the dramatic ascent to the balcony of the sound castle. I sat down & the music began, a bass drone under the muezzin's call. Oluyemi is a deep brother who sounds like nobody I have ever heard. His is the voice & the cry of the people, it is the sound of the collard green tree with dark purple leaves & yellow feet.
At one point in the concert the sunlight outside began to respond to the music. My eyes lifted to the top of my head & I saw the church turn blue as the sky let the vibrating sound inside the lobby of the left side of heaven..
Oluyemi continues to dance while Alan Silva anchors the boat. I was there & I heard it. The church turned blue & fifty million people in India who were starving could immediately feel the love, & they were thrilled to know that some cared enough to play music for them. The sound shifted again, & it brought a smile to the Ethiopian boy who is four years old & weighs only fifteen pounds. I know this music went out to his mother. When the concert ended I saw red flowers begin to push their way through the sky. Downstairs in the basement of the church Marshall Allen, Sabir Mateen, Daniel Carter, Oluyemi Thomas, & Alan redefined spiritual unity. --William Parker (liner notes)

In the period between 1965 and 1970 alone, Alan Silva's double-bass innovations graced enough enduring, if not historic, recordings to ensure a permanent prominence in the discussion of the evolution of extended techniques and the instrument's role in improvised music. Curiously, however, he is rarely mentioned in the same paragraph, let alone breath, as the principals of The New Thing, despite a subsequent, steady output of recordings into the late '80s. A discographical gap between 1987 and '93, and a focus on keyboards on most of his recordings in the '90s, certainly did not help his stock as a bassist. Transmissions, a duo program with woodwind player Oluyemi Thomas, is a welcomed opportunity to hear Silva reassert his compelling voice on the instrument. Despite its densities, Silva's style can be distilled to a few core components: a distinctive glissando; a rich variegated arco attack; and a Minguslike tapping of deep roots, which is best heard here on the solo "Offering to the Exalted One." As this continuous performance arcs from low, gravel-voiced rumblings from Silva and Thomas' bass clarinet (which can be mistaken for David Murray's) to a finale driven by Silva's slap-accented figures and Thomas' simmering c-melody sax, Silva's signatures are tirelessly and imaginatively reworked. Additionally, Silva is a keen listener (as is Thomas), who repeatedly ratchets the tension or shifts the color at the right moment to charge the dialogue. Transmissions is an absorbing album, and a clear signal of Silva's ongoing vitality. --Bill Shoemaker, Jazztimes

It was wonderful to see Silva play the bass, an instrument he has purposely shunned of late in favor of electronic keyboards. He develops true spiritualism around Thomas's explorations, robustly coloring the entire canvas with enormous splashes of resonance. The most memorable moments occured as the afternoon sun began to set, casting filtered streaks of hued light into the growing darkness. Silva offered up a solemn bowed prayer through his playing in eerie response... This performance is filled with beauty & engrossing communication between two men who were mutally in tune with another world on this occasion. It is art that deserves to be heard by all lovers of improvised music. --Frank Rubolino, Cadence

Despite a small market for radically free improvisation, Eremite, along with a handful of other tiny labels, somehow manages to continually produce some of the finest freely improvised live jazz recorded in the United States. Sometimes the players are not as well known, but the documented performances are of superior quality. These five conversations between the skillful and vastly under-recorded bassist, Alan Silva, and the even more obscure reed player, Oluyemi Thomas, are exercises in how to maintain a continuous flow of ideas for nearly an hour of live performance. Thomas' primitive style has roots way in the past, but his radical approach and style and partial rejection of traditional swing marks his lines as something beyond the ordinary. Silva caresses his strings, sliding, stretching, even whining, and, like Thomas, embraces unconventional ways of playing. --Steven Loewy, Allmusic