The All Star Game 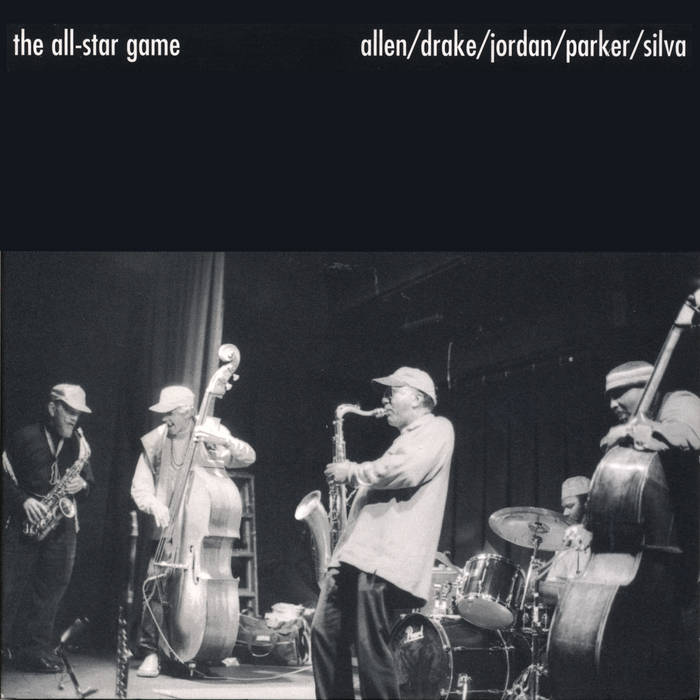 an imposing concert recording by a remarkable gathering of first & second generation american free jazz heavyweights. octogenarian marshall allen, a member of the sun ra arkestra since the early fifties & now the arkestra's acting leader, makes a rare small group appearance. septuagenarian edward "kidd" jordan is a secret hero of american music, a legendary musician whose dedication to grassroots education in his hometown of new orleans has kept his profile low among the general jazz public (his sons kent & marlon --& all the marsalis brothers-- number among his many students). a member of the 1960s arkestra, alan silva is widely recognized for his otherworldly bass playing & his innovations in the rarefied realm of large ensemble free improvisation. william parker & hamid drake are the premier rhythm section in the resurgent american free jazz scene, & the all-star game reveals yet another facet of their powerful chemistry.

There's much to celebrate about these two discs, classic encounters of the energy chapter of free jazz -- in each case two saxophones & rhythm section blowing toward some apocalyptic possibility; no theme in sight, with power & conviction that have too often seemed drained from American free jazz. What happens in each case is an explosion of impassioned utterance, soul-searing work in the rituals first defined by Ayler, Coltrane, Sanders & the Sun Ra reed section of which Marshall Allen was a member. These may not, in any sense, be regular bands, but they're bands without a weak link, whether ego-centric, technical or conceptual. The All-Star Game features what is unquestionably the senior ensemble. It's a marvelous meeting in which Allen & Jordan dance across the pulsing maze of multiplying rhythms set up by Drake & the two basses of Parker & Silva (another early presence). & what a pleasure it is to hear the two bass combination, a feature of some of the classic & defining recordings of the genre. While Jordan unquestionably belongs in the All-Star Game, he is among the most under-rated of musicians, a fountain of torrid energy & exalted invention who is entirely worthy of this rhythm section. (the other disc referred to early in this review is Leo 369, Shoup/Flaherty/Moore/Corsano Live at Tonic.) -- Stuart Broomer, Coda

The All-Star Game indeed. This 73-minute jam in six parts is the aural document of a gig held at the ICA in December of 2000. The lineup that champion saxophonist Marshall Allen chose is startling: Kidd Jordan on tenor, Hamid Drake on drums, and both William Parker and Alan Silva on basses! And before you surrender to the erroneous notion that this is just some blowing session where skronk is the name of the game front and back, get real. These men are all improvisers of a different sort. All of them have played in very disciplined units and know how to make the most of dynamic, harmonic interplay, tonal dexterity, and (of course) group interplay as well as solo improvising. The exchanges between Allen and Jordan themselves are remarkable for the way in which contrapuntal allowances are turned around in a series of cadences dictated by the bassists and then articulated through first subtle and then bleating shifts of tone and color. The articulation of breath, elongation of line, and opposing notions of legato phrasing as it differs from alto to tenor player is remarkable. On the third and fourth sections, the engagement of both bassists with Drake as the sax players lean in to play tight and close to the rhythmic sprawl is nothing short of astonishing. That this intensity of focus and creativity is displayed for this length without a single straw note or easily copped riff or trope is remarkable in and of itself. But the real secret of this gig's success was in its reliance on keeping the rhythm section the center of focus and attention: this music swings -- albeit in an entirely new way -- as hard as it blows. --Thom Jurek, Allmusic

Anyone who dares say that Alan Silva's over the hill as a bass player just because he spends a lot of time these days sitting behind a synthesizer should be forced to listen to this baby through ten times in a row. He teams up here with William Parker to form the most dynamic two bass section since Cecil Taylor's Unit Structures (which featured, as you'll recall Henry Grimes and.. Alan Silva). For once even Hamid Drake sounds like he's being driven rather than doing the driving. Not surprising since there's another titanic duo out front, veteran Sun Ra alto saxophonist Marshall Allen and Edward "Kidd" Jordan on tenor. Actually, "veteran" is the kind of disparaging term that Ehlers has been fighting against since he started his label (so i'll tactfully withdraw the epithet): his artistic credo has always been to document the work of the earlier generation of free jazz pioneers who are still very much alive and kicking but whom few labels seem to want to record (the Ken Vandermarks of this world can fend very well for themselves, after all). This volcanic 75 minute live set recorded in Boston's ICA Theater on December 1st 2000 is glorious proof that Ehlers is on the right track. The combined age of these five gentlemen may be well past 300, but any one of them could go the full fifteen rounds with the young cats and probably floor them with a hook to boot. --Dan Warburton, paristransatlantic