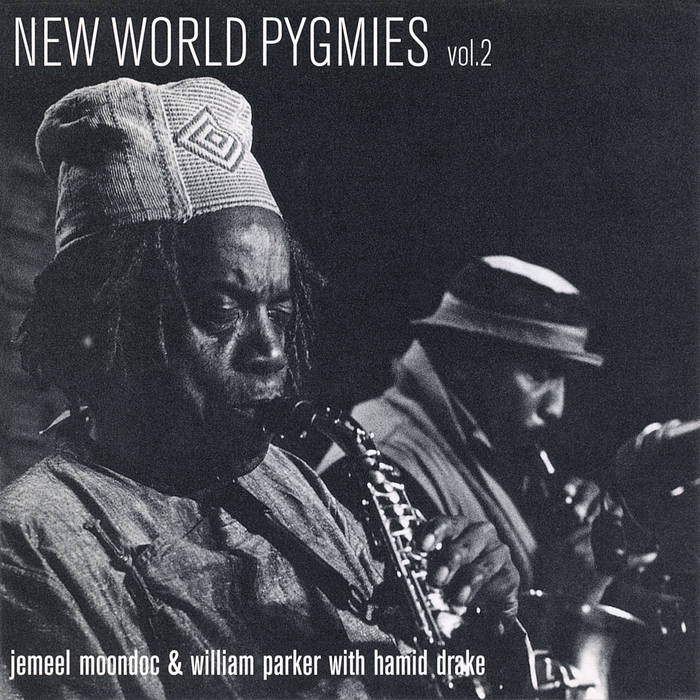 eremite continues its documentation of this remarkable duo, who have played together since 1973, with a double c/d set (140+ minutes) featuring two concert recordings from a 2000 tour. on both versions of "new world pygmies," parker's recent interest in double-reed instruments & moondoc's introduction of a soprano saxophone move their music into realms of joyfully non-tempered playing recalling the master musicians of jajouka. elsewhere the bass & alto join for ravishing performances of compositions from both musicians' books. on disc 2, hamid drake is inducted as an honorary pygmy for a concert at chicago's legendary velvet lounge, an emotionally charged homecoming for moondoc with much of his family in attendance & a queue out the door all night.

New World Pygmies Vol. 2 is a continuation of the long-standing relationship between Parker & saxophonist Jemeel Moondoc. Veterans from Sam Rivers' legendary loft encounters of the 1970s, Parker & Moondoc grapple with a multitonal free jazz renaissance that encompasses the music of the rainforests. Blues-based & cross-cultural, their sonic conversations follow a decidedly non-western logic that unfolds with eccentric passion & dramatic power. Moondoc's narratives on alto & soprano are wildly emotive, as is his expansive discourse with Parker. Parker himself is typically profound, dueling with Moondoc via intuitive basswork as well as blowing double reed instruments from France (the bombard) & Barcelona (the gralle). Drake, who enjoys an obvious rapport with Parker (& Moondoc), contributes admirably, playing quite freely & with vigorous imagination throughout disc two, which was recorded live at the Velvet Lounge in Chicago. --Mitch Myers, Downbeat

Running a record label is a constant search for music that's pushing the envelope, taking the genre concerned and moving it to the next level, onwards and upwards. It's a joyful adventure, but a frustrating one: no sooner has one batch of discs made it to the CD player before a new package appears in the mailbox. Eventually, there comes a time when choices have to be made - for Eremite's Michael Ehlers that means concentrating on championing a generation of musicians who came screaming forward in the early days of free jazz, and who are still playing superbly today despite the rise to prominence of a second generation of young lions which has grabbed the attention of the media (not to mention a few juicy awards and prizes). In his liner notes to the recently released Bob's Pink Cadillac (also on Eremite: see elsewhere), William Parker writes: "When life is on the line nothing can be left up to chance. We rehearse and practice daily so when the angel of music comes we know what to do." This recalls Sunny Murray's line in his interview in STN #23: "I'm here to practice or to do something spiritual with my life as a musician. I'm constantly training, fortifying, feeding my spirit so that the lack of work won't beat me." Unlike Murray, William Parker isn't exactly short of work: in November 2000 he and alto / soprano saxophonist Jemeel Moondoc took to the road with "the New Eremite Mobile Unit" (Ehlers, his gear, and his Volvo station wagon), playing Fred Anderson's Velvet Lounge in Chicago on the 4th, and the Spotlight Room up the road in Madison, Wisconsin the day after. New World Pygmies Vol. 2 documents those two evenings. There's an integrity to Moondoc's music that is all too often lacking in the work of younger saxophonists, who seem to be more concerned with running all over the instrument, or even blowing it to pieces (ironically, a display of "chops" not so far removed in spirit from the technical preening of the much-maligned Marsalis). Firstly, when you've got a sound on your horn as full and round as Moondoc's, you don't need to run through a whole book of scales and arpeggios to impress. Even in the most active pieces on offer here (and these lads can slap and swing like crazy when they get going), you get the distinct impression that Moondoc can always find the necessary breathing space. Like Steve Lacy, he teases ideas out of the horn, letting them develop at their own pace, secure in the knowledge that Parker is right behind him every inch of the way. His bowed work on Moondoc's "You Let Me Into Your Life", with its affectionate nods to "My Darling Clementine" (compare with the sumptuous reading of the same piece on Moondoc's Revolt of the Negro Lawn Jockeys, Eremite MTE 028) is magnificent, and on the title track, though his technique on the bombard and gralle (both European double reed instruments) may not be as advanced as Jemeel's on sax (meaning that Moondoc lets Parker lead the way most of the time, embellishing his lines with dazzling arabesques), the interplay between the musicians is exhilarating. With Hamid Drake sitting in on drums on the second disc (from the Velvet Lounge), New World Pygmies heads off to the African interior in a joyful explosion of power and light. Drake, as we all know, is a veritable one-man Gnawa orchestra, but his solo on the title track is amazing even by his standards. Following without a break, Moondoc's "Blues for Katie" begins with a meaty six-minute Parker solo, before Moondoc takes his soprano sax on a guided tour of the entire history of the blues until Drake returns, swinging as hard as Dannie Richmond. The closing reading of Parker's "Three Clay Pots" (which makes for an interesting comparison with the version of the piece on In Order To Survive's The Peach Orchard) rounds off a memorable set. There must be quite a few young cats out there who'd love to have an album out on Eremite, but they'd do well to remember music as fine as this only comes from many years of playing, training, fortifying and feeding the spirit - and you know it'll still be sounding just as great many years from now. --Dan Warburton, paristransatlantic

Alto & soprano saxophonist Jemeel Moondoc, bassist William Parker, & drummer Hamid Drake have played together, off & on, in various configurations for more than two decades. By now, they have a great ability to intuit one another's improvisational routes. The 2-cd New World Pygmies Vol. 2 (Eremite) documents a pair of inspired live concerts --one with the Moondoc/Parker duo & one with the trio-- based on, as Parker writes in the liner notes, "the human heartbeat & the human voice." Aligning their music with the otherworldly, polyphonic or micro-tonal vocalizations of the Pygmies (rain forest peoples of Central Africa), the improvisers aim to push their songs beyond so-called jazz & into what Parker calls the realm of "black mystery music." Though one can easily discern groove-rich jazz & blues-derived phrasing on "Three Clay Pots," "Spirit House," "O'Neal's Porch," & "Blues For Katie," a structural openness & prayer-like intensity permeates all the tracks, which gives them a palpable feeling of freedom more typically associated with "free jazz" or "energy jazz." But even these designations may be a bit misleading. Moondoc's soaring liquid melodies --though indebted to Ornette Coleman, Eric Dolphy, & other founders of the avant-garde idiom-- have an inimitable quality all their own. & the music the players make together breathes with a distinct empathetic charm. --Sam Prestianni, Jazziz

How often does a live record fail to capture the moment's magic? The souvenir has the potential to desecrate the memory. The double-cd New World Pygmies Vol 2 (Eremite), by Jemeel Moondoc & William Parker, which includes an incendiary set i saw in november 2000 at Chicago's celebrated Velvet Lounge, doesn't let me down. Stoked by hometown guest Hamid Drake, the two men were on fire that night; while Moondoc blew scorching blue flames out of his saxophones, Parker's bass & Drake's swinging trap work & pan-ethnic hand percussion spun a kaleidoscopic matrix of ever-changing rhythms. The core duo burns even brighter on a second version of the title tune recorded the next evening in Wisconsin. The ribbons of sound that emanate from Parker's bombarde (a medieval French double-reed instrument) & Moondoc's soprano intertwine like molten streams of gold to create a shining jewel of a performance. These men first played together almost thirty years ago, & the longevity of their relationship pays dividends when they take chances. whether Moondoc lets his alto lag far behind the beat or parker plays an out-of-time arco melody up near the violin range, each knows excactly where to stand so the other can't fall. --Bill Meyer, Magnet

Bassist William Parker & saxophonist Jemeel Moondoc's ongoing New World Pygmies series attempts to reconcile the ritual, horizon-spanning beauty of pymgy music with secular, urban blues. Recorded over two concerts, the second at Fred Anderson's Velvet Lounge in Chicago, the performances on Volume II sound like invocations, as if they're out to raise the dead. The first set pairs Moondoc's "Spirit House" with Parker's "O'Neal's Porch". Compared to their earlier, joyous big band incarnations, these versions are as tight as new pants, with Parker's bass walking the city skyline, while Moondoc rains down little spurts of sax. The first of two takes of "New World Pygmies" moves someplace else entirely, as Parker switches between Bombard & gralle --two double-reeded ethnic instruments that sound like they are tearing the sky. Combined with Moondoc's soprano, they conjure buzzing swarms of insects. On the second disc, they're joined by master drummer Hamid Drake for a set that moves deeper into the blues, featuring Moondoc's vocalized horn at its most pained & expressive. --David Keenan, The Wire