Never Too Late But Always Too Early 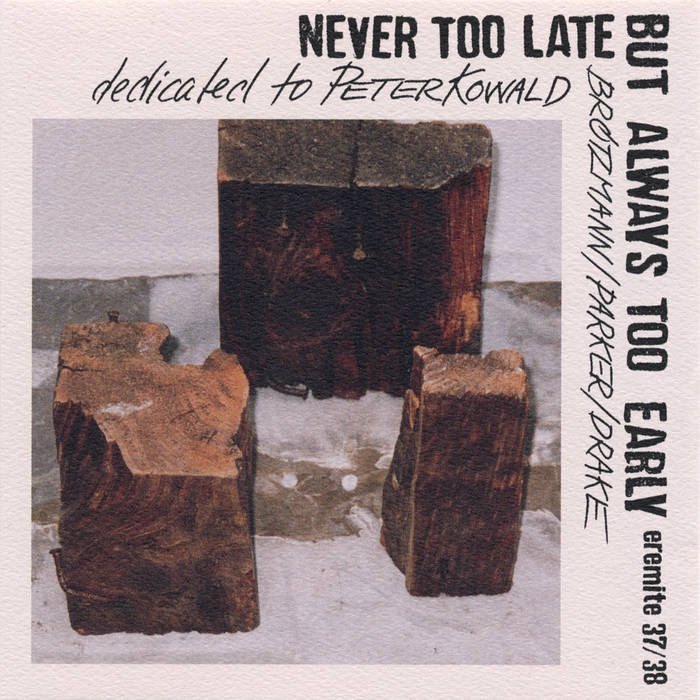 founded in 1993, peter brötzmann's die like a dog band is widely regarded as "one of the leading ventures in the history of avant-garde jazz" (all music guide). its fusion of brötzmann's explosive "kaput music" with the omni-sourced rhythms of hamid drake & william parker makes for one of the most exhilarating ensemble sounds in any & all music. a two c/d set, never too late... is the trio's complete concert from 10 april, 2001, montreal. eremite recorded every north american performance by the group from 2000 to 2005, & never too late (dear friends) is the motherfucker of them all.

Homages to the late Peter Kowald grow more numerous, but few will match the searing, visceral pull of this two cd set etched by some of his closest friends & associates in Montreal's Casa Del Popolo in 2001 & dedicated to Kowald after his death in 2002. Peter Brötzmann is a specter of grim emotion & raw energy, whether he's playing tarogato, tenor, or a clarinet in A. He is one of the great existential improvisers of free jazz, in that his intensity does not seem to move toward transcendence but instead speaks of expanding passion. It is because of Brötzmann's emotional register that this epitaph in advance to Kowald is so fitting. Pain, loss, distance seem so central to the saxophonist's expression --witness the tenor dirge of part 4 of "Never Run, But Go" which seems to refer directly to 'taps'-- that the specific subject only awaits naming. William Parker & Hamid Drake support, structure & alleviate Brötzmann's testimony, adding & sustaining pulsing patterns that invoke African & Afro-Cuban ceremony. On the first segment of the title piece Brötzmann launches a bass clarinet solo in which human cries are seemingly muffled in the instrument's woolly depths until they break out into screams in the middle register. Parker & Drake seem to ground & share in this witnessing, until Parker begins an extended & especially powerful bowed solo. --Stuart Broomer, Coda

Eremite producer Michael Ehlers captures one of free jazz's finest trios live in concert in Montreal on this stunning double c/d recording, Which is --considering the prodigious output of the players-- incredibly one of the group's best on disc. Peter Brötzmann, William Parker, & Hamid Drake have been playing together for years now, & there is an instinctive synergy among them that is clearly evident on every track. As with many of Brötzmann's later performances there is plenty of slash'n'burn intensity but there are also many moments when Brötzmann turns inward to focus on colors, shading & nuance. There are numerous highlights, from the usual thrilling over-blowing by Brötzmann on all three reeds, the Drake/Parker collaborations when Brötzmann drops out (as on the second & third parts of "Never Run But Go," & the enlightening "The Heart & The Bones"), & spectacular contributions from all three as soloists & as part of the group. Posthumously dedicated to Peter Kowald the discs represent the best of modern creative improvisation as the strategies pursued include focusing on building & releasing tension, maneuvering through complex time signatures, & generating magnificent clusters of sound that recall the best of later Coltrane. The short closing number on the second disc, "Half-Hearted Beast" is a rousing chord-based blues-drenched romp that opens the rafters & leaves the crowd screaming for more, even after two hours of nearly unadulterated intensity. Almost certain to appear on many top-ten lists, Never Too Late But Always Too Early is Brötzmann, Drake, & Parker at their best, & it is an important & valuable contribution to each of their discographies. --Steven Loewy, Cadence