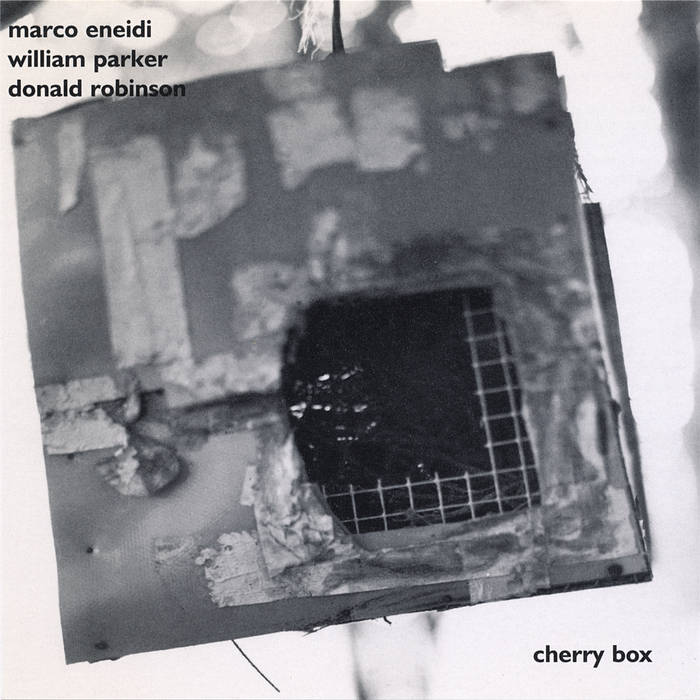 Despite a string of significant releases on the Botticelli label, altoist Marco Eneidi remains relatively unsung. Unfairly so on this showing. He is a vigorous & exciting player, his hard-blown overtones white-rafting tumbling torrents of rapid notes in a searching exploration of the horn's timbre. Scarcely better known, drummer Donald Robinson served time in the late Glenn Spearman's various groups. His drumming rarely takes center stage here, but its polyrhythmic complexity & tonal color evidence an experienced & expressive player. In this context, Parker acts as mediator & facilitator, bonding & framing Eneidi & Robinson's contributions. It is a deeply humble performance, admirable in its self-effacement. --Alan Cummings, The Wire

What's immediately attractive about Marco Eneidi's saxophone playing is that it's loud & fast. Nothing can prepare you for his tone; let loose in a small ensemble his tone won't intimidate as much as terrify. Regardless of what's going on & who's playing what, if Eneidi's playing, Eneidi can be heard. Then there is his superhuman virtuosity on the horn. No tempo is too fast; for that matter, the faster the tempo, the more natural his playing sounds. But if loud & fast were the sum & substance of Marco Eneidi, he would be enjoying widespread albeit conceptually emaciated popularity. Unfortunately, Eneidi challenges those merely looking for someone to gawk at, inevitably frustrating the vanilla-inclined & otherwise shallow with his sophisticated approach to tonality & phrasing. Eneidi's Cherry Box marks the first small ensemble recording with Denis Charles & William Parker since Vermont Spring 1986 that he's not using Jackson Krall on drums. Donald Robinson's drumming is less conspicuous than Jackson's & as a result one of less constraint. Not that Jackson is a constraining drummer-- with Jackson, the feel is more two-voice counterpoint. Though his closest antecedent is Jimmy Lyons, Eneidi isn't cowering in his shadow. Like Lyons, his ability to arrange (or follow, if you look at it that way) a solo is remarkable. "Slashing the Bird" illustrates the consistency with which he creates challenging variations on already advanced ideas without being redundant. Eneidi is an asset to the music, contributing new material to & giving us fresh perspectives on this music's tradition. As with all of Eneidi's small group work to date, Cherry Box eloquently & ably moves the music ahead. --Stanley Zappa, Bananafish

The 1998 trio shows Eneidi off at his best, blowing fiercely enough to make his wirey saxophone sound glow with energy. Parker does his usual thing, but Robinson is the real star of the piece, providing a tireless but subtle accompaniment. --Richard Cook & Brian Morton, The Penguin Guide To Jazz Recordings