Always Coming From The Love Side 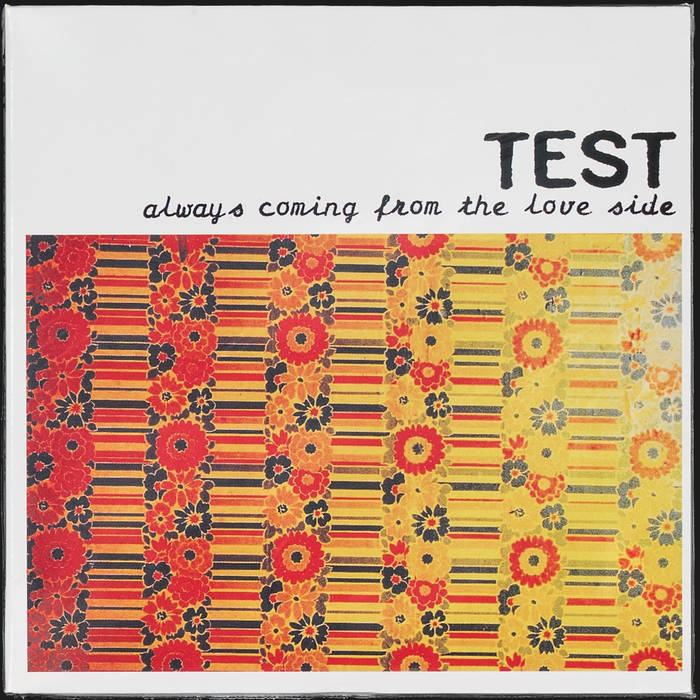 I first heard TEST in June 1996 at the Learning Alliance, 324 Lafayette Street, 7th floor. The occasion was the very first Vision Festival. The mid-90s was a signal moment for avant-garde jazz & TEST was creating a buzz among the capsule of younger freaks gravitating to the scene. If the David Ware Quartet was the flagship group, TEST was literally the underground favorite —as part of the Music Under New York Program, TEST was out on the streets & subway platforms year-round, playing long-form unadulterated free jazz with an energy & creativity level rarely encountered. Even on a scene known for strong personalities these guys were obviously renegade cats. I mean, who else would do that? Sabir Mateen (1951) spent the '70s in LA playing in Horace Tapscott's Pan-Afrikan Peoples Arkestra. Tom Bruno (1937-2012) & Daniel Carter (1945) had been gutting it out downtown for ages. All three were U.S. military veterans. If you were looking for old-school visionary New York City counterculture musicians, with everything that implies, there were no better examples. TEST went through a couple of bass players (Poki Hudgins & Dan O'Brien) before Matt Heyner (1972) joined. As a member of NNCK Heyner was a next gen nut-rocker, in TEST he was a gently steady force. Once, as TEST was playing a street gig, a fellow musician passing in a cab described the band as 'Japanese soldiers in a cave who don't know the war has ended.' The street & the subways were TEST's higher reality, the dues behind its uni-mind chemistry & incredible stamina.
For worldly guys, TEST seldom seemed to leave the island of Manhattan. But later that summer David Nuss drove the band up to the Amherst Unitarian Meetinghouse where it delivered a set that flat-out stupefied the twenty or so attendees & had the effect of a free jazz revival meeting on yours truly. Believing widespread conversions would follow if new audiences heard TEST's music, i brought TEST back to Amherst as often as possible & in 1998 booked the band a short, scrappy tour through the Mid-Atlantic & Southeast. eremite released some of the tour recordings as LIVE/TEST, one of four TEST albums (one each for Aum Fidelity, Ecstatic Peace & Now Jazz Ramwong) that are all way out of circulation now.
More ambitious was the tour of '99. We schlepped around The Rust Belt & Upper Midwest in November, putting four thousand miles on a 16 passenger van, crossing the US/Canadian border excessively, piling on the distances, the jackets & the gas station food. Amherst, Rochester, Deerborn, Chicago, Minneapolis, Toronto, Buffalo, Pittsburgh, DC. Seldom is the road a smooth ticket. I was a total novice at tour management, TEST's particular collectivist decision-making style made routine business ringy, & the free jazz economy doesn't exactly get you all the way home.
The highlight of the whole crazed enterprise was TEST's 13 November concert at Fred Anderson's Velvet Lounge, 2128 1/2 Indiana, Chicago Near South Side. I vividly recall what a great occasion it was just to arrive there! We all knew we were at an authentic Jazz Shrine that night, not many of those left by 1999 (in 2006, the original Velvet was demolished to make a parking lot). I heard TEST often & the band was nearly always, as we used to say, ecstatic, but the Velvet Lounge vibe along with Fred Anderson's dignified presence & a large rowdy crowd summoned absolutely fearsome & magical endurance tests from the band. We have the late Malachi Ritscher to thank for the fine recording.
This was always meant to be the next TEST record, & now finally it is. TEST continued to play NYC streets & subways into the mid-2000s, with occasional gigs around the city & out of town. The band's final performance was at the 2012 Whitney Biennial, of all places. Always Coming From the Love Side was one of Tom Bruno's many indelible expressions. eremite dedicates this record to the memories of Tom Bruno, Fred Anderson & his Velvet Lounge, Malachi Ritscher & to the legacy of TEST.


Taped at Fred Anderson’s Velvet Lounge in November 1999, this is a life-affirming set from one of the decade’s greatest free jazz bands. A collective group featuring Daniel Carter & Sabir Mateen on reeds, the late Tom Bruno on drums, & Matt Heyner of The No-Neck Blues Band on bass, TEST weave reed harmolodics & Ayler-esque folk fragments around ecstatic free drumming. Carter & Mateen’s interplay is sublime, from their initial weaves of trumpet & alto clarinet, through to their climactic saxophone communion. Bruno is an astonishing drummer, tuned to the multidirectional flow of Rashied Ali, while pushing the music forward with surging bop fills on the snare. Heyner anchors the music with a clear sighted sense of harmony & pulse. At times, the music reaches such a joyous pitch the players will break into song, riding Bruno’s waves of liberated rhythm with gospel calls, field hollers & street chatter. One utterly gorgeous passage see Carter leading the group into ballad mode, the tender passion of his saxophone trailed by the curling blue smoke of Mateen’s alto clarinet. --Stewart Smith, The Wire

While the City of New York has changed completely and rapidly in the last two decades, one can still find small clutches of what the boroughs once offered – spots of renegade art and life buried beneath super-gentrification. The buskers beneath the streets are still in effect, though apart from a balafon and a few kora players, most notable these days are a possessed Beatles interpreter and a few drum battles. Yet the air around and under Astor Place where the 6 train stops still crackles with energy, resonating out of the white and brown tiles in the alcoves that once were a small amphitheater for TEST, a freely improvising unit consisting of drummer Tom Bruno (1932-2012), reedists Sabir Mateen and Daniel Carter (who also played trumpet) and bassist Matthew Heyner (NNCK). Supported by the MTA’s Music Under the Streets initiative, TEST performed regularly in the subways throughout the mid-90s and into the early 2000s, also playing concerts from the Vision Festival to the Whitney Museum of American Art. The band grew out of music that Carter and Bruno were making under Manhattan and all of the players save Heyner had been playing in the subways for years. In part if not in whole the music bubbled up from the community-oriented approach that characterized the NYC Artists’ Collective and 501 Canal Street, a loft which Bruno, vocalist Ellen Christi, multi-instrumentalist Cooper-Moore and saxophonists David S. Ware and Alan Braufman had occupied from the mid-70s.
There were never tunes or heads – TEST’s improvisations grew and spiraled out of one another, but always linked up in pulsating shimmies, “free” but with an ever-present loping, somewhat clanky groove. While most groups of the period – Ware’s, Jemeel Moondoc’s, Roy Campbell’s, William Parker’s – were compositionally-centered, TEST (and a few others) were completely open with both horn men switching between an array of saxophones, clarinets, and flutes. No matter how good the contents are, hearing TEST on disc is nothing like hearing them in their natural habitat, and of the four albums that were released during the group’s lifetime, only one was captured outside of the studio (Live/TEST, Eremite, 1999). One couldn’t feel the disarming contrast between pure expression and workaday indifference or occasional intrigue from passersby, bodies wrapped in action and deep listening against unforgiving concrete and steel. That said, it’s appropriate that these archival recordings were captured on a 1999 tour on which TEST played Fred Anderson’s Velvet Lounge in Chicago – the old space, on S. Indiana, which was closed to make way for new developments in 2006. Malachi Ritscher, who died the year that the original Velvet closed, recorded these five improvisations spread across two discs (they were mastered by the recently departed Michael King). Hearing Bruno’s dry, rolling chatter as a subtly thick constant around and behind the guttural staccato of Carter’s horns and Mateen’s crisp, keening baubles in near constant interplay, sometimes slashing and at other times in a relaxed loquacious swing, Heyner’s ropey pizzicato supporting underneath, is a marker of time and place. The back stage at the Velvet, low-lit, with a smattering of black tables and chairs and saxophonist-owner Fred Anderson unassumingly tending bar and door, is indelibly scratched into the memory of those who were there, just as one who witnessed TEST in a downtown New York subway performance never forgets it. Luckily these two strains of completely uncompromising artistic space were able to share an above-ground moment a few months before the Millennium. --Clifford Allen, Point of Departure