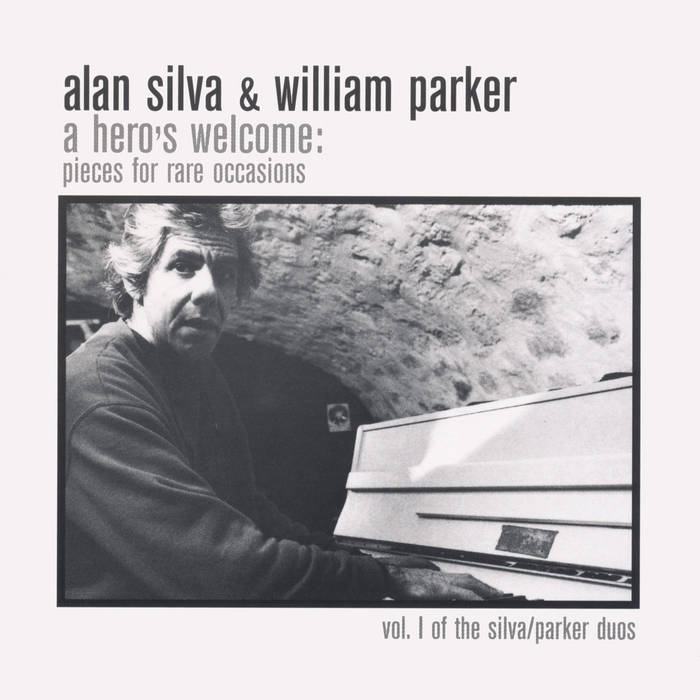 alan silva's playing and live composition have been a highlight of the avant garde's living history for the past 35+ years. from his work with sun ra's arkestra, through extended relationships with bill dixon, cecil taylor, and albert ayler, on into the celestial communications orchestra and the frank wright center of the world band, silva has been one of the music's most consistently valuable thinkers. a child of alan silva's other-worldly strategies for double bass, william parker is the premier bassist of the contemporary free jazz era. a hero's welcome is a spontaneous composition dedicated to the spiritual essence of sun ra and to all the great string players of the 20th century. it was recorded at the first duo performance silva and parker undertook, and is the first installment of the eremite silva and parker ongoing strings duo project, which among other things will entail at least one duo (or extended duo) recording by silva and parker for eremite per year from now until the big O. two full orchestras couldn't mix it up more completely.

Two modern giants of the bull fiddle, united in a project of awesome power. Silva's ambitions to write orchestrally have finally been fulfilled. He used MIDI keyboards & old-fashioned acoustic piano to create a body of sound that occupies a mid-territory between Duke Ellington or Charles Mingus & Edgard Varese. The five relatively brief sections might almost be movements in a romantic symphony, were the language & articulation not so unmistakably American. Parker is by now beyond reproach & beyond categorization: but what is surprising is how thoroughly & how completely Silva still thinks/plays like a bass player, even if nowadays his imagination ranges right across the strings & beyond. The good news is that this is just the first release in a sequence featuring a remarkable modern duo. --Richard Cook & Brian Morton, The Penguin Guide To Jazz

Together, Silva & Parker play a music that is stunningly decisive & seamless, gorgeous & dramatic. It grooves like a motherfucker, but it's also highflown, strident & abstract. The multilayered textures immediately reference the classical tradition, suggesting two post-tonal orchestras improvising in real time. The musicians grip each other's lines as intimately & passionately as lovers, but the eloquence remains symphonic... If only swinging the classics --or 'jazz' as some call it-- always sounded this succulent. --Ben Watson, The Wire

A Hero's Welcome is a phenomenal meeting. Silva provides orchestral arrangements of massed instruments, midi keyboard work, & some excellent acoustic piano. His genius is on high-beam throughout. Parker responds with a masterful performance on double bass, one of the best he's given on record, & is the diva in Silva's opera, singing his ass off in this dark forest of sound. This record is volume one of their duets, if you can call them that. Really, A Hero's Welcome is more a collision of two spirited orchestra's --Silva's & Parker's. The sound is that big, deep, evocative. This suite in five parts generates reference to & reverence for some many visionary twentieth century artists --Sun Ra, Lutoslawski, Penderecki, Partch, Crumb, Ellington, Coleman, & some bluesman, too-- that it's a fitting performance to close the century. --Doug Lang, Coda